Hello from the 17th District!

It’s been a busy month in Springfield!

We’ve made tangible progress creating stronger protections for Illinois children. We passed legislation to combat the alarming rise of e-cigarette use among young people—the first of its kind in the Midwest. I also sponsored two bills to protect immigrant children, including one that specifically addresses children who have been neglected, abused, and abandoned. I am proud that both measures passed the House with broad, bipartisan support.

We’re working to grow the Illinois economy in a balanced way that attracts new investment and treats workers fairly. That’s why I sponsored two important pieces of legislation: one to cut through red tape in the Illinois bond process to streamline construction projects and another to hold those employers accountable for preventing wage theft.

I am proud of the progress we have made, but humbled by the challenges we still face. In the coming weeks, the Illinois House and Senate must work together on a bipartisan basis to pass a comprehensive, balanced budget. This is a crucial turning point in repairing Illinois’ systemic financial problems. I welcome your input in this process. 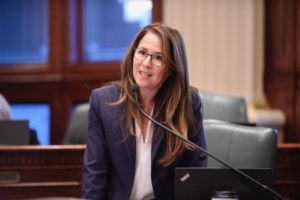 HB836 protects immigrant children in the event a parent is detained or deported by immigration officials, creating a clear pathway to designate a short-term legal guardian instead of forcing the child to enter the foster system. HB 836 passed the House 89-19 and now moves to the Senate for consideration sponsored by Senator Ram Villivalam.

HB1553 fixes inconsistencies in Illinois law to streamline the process for abused, neglected, and abandoned children of immigrants to petition the federal government for protected status. HB 1553 passed the House 87-18-2 and now moves to the Senate for consideration sponsored by Senator Cristina Castro.

HB2722 cuts unnecessary red tape in state government to boost new construction in Illinois. It allows bonds issued under the Public Bond Act to be used for renting necessary equipment, including machinery and other apparatus. HB 2722 passed the House 73-28 now moves to the Senate for consideration sponsored by Senator John Mulroe.

HB2838 puts guidelines in place to prevent wage theft in the construction industry, requiring primary contractors to take responsibility for subcontractor’s wage and benefit claims. HB 2838 passed the House 70-41-1 and moves to the Senate for consideration sponsored by Senator Laura Fine.

Public Act 101-0002 raises the legal age for the purchase of tobacco products, cigarettes and e-cigarettes from 18 to 21. Illinois is the first state in the Midwest to take this vital step towards reducing tobacco use among young people. Public Act 101-0002 was signed into law by Governor Pritzker on April 8th , 2019.
0
Share

December 1, 2019
Posted by : staff
0
0
Dear Neighbor, I am proud to have served in one of the most productive legislative...