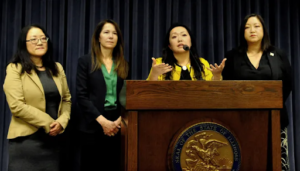 Anti-Asian hate has spiked in recent years across a dozen of America’s largest cities.

On Wednesday morning, members of the Illinois Asian American Caucus gathered at the state Capitol to reflect on lives lost and speak against racism.

March 16 marks the one-year anniversary of the shootings at three Atlanta-area spas which claimed the lives of eight, including six Asian American women.

Illinois state Rep. Theresa Mah, D-Chicago, said although the event happened outside of Illinois, there is concern over racism against Asian Americans within the state.

“From verbal assaults at the Chicago Botanic Garden to the man beaten with a bat in uptown, this has hit our community very hard and it has not stopped,” Mah said. “As Asian American elected officials, we call for an end to these heinous attacks against our community. We’ve seen anti-Asian hate throughout the history of this country and a dramatic increase over the last two years.”

In response to the rise of Asian hate in 2020 during the pandemic, the AAPI Equity Alliance, Chinese for Affirmative Action and the Asian American Studies Department of San Francisco State University formed the Stop AAPI Hate coalition. Incidents of discrimination, harassment and other forms of violence are reported to the organization and its mission is to keep track of them and respond.

Between March 2020 and February 2021, the Stop AAPI hate reporting center documented 3,795 attacks toward the Asian American community. The organization received 9,081 incident reports of racially-motivated attacks since the pandemic began.

“It was the first time I learned about the existence of the Chinese Exclusion Acts through which my own family faced deportation. It was when I was studying the constitutionality of race-based immigration laws that I learned the devastating impact of those racist laws on my own family,” Gong-Gershowitz said. “The teaching act is about ensuring the next generation doesn’t have to attend law school to learn something about their own history. It’s important to connect them to the Asian American experience and let them know they’re seen.”

As the first Asian American elected official of McLean County, Sharon Chung said her fears are magnified when stepping out into the community. Chung, who is on the county board, said she has to be prepared to defend her children and herself.

“Being in a smaller area like Bloomington-Normal I’d like to think I know the people in my community and my neighbors and that something like this wouldn’t happen, but I’m out there in the public and when I’m accused online of being an agent of China and that I’m not to be trusted it gives me some pause,” Chung said. “Teaching Asian American history is so important because people truly fear what they don’t know. Education is really the only way to combat that.”

Earlier this year an Asian American woman in Springfield, Xuna Hu, was shopping at a local Lowe’s when she was told, ‘Go back to your country.’

Mah said such statements toward Asians are common. Enforcing the TEAACH act will hopefully help stop racism both in schools and on a larger scale, she said.

“It will help people realize that Asian Americans are a part of this country and we’re not forever foreign because that’s the idea that many people have. They think if we have an Asian face we must be from somewhere else and it’s OK to be told to go back to another country. We hope one of the outcomes of the act will address the idea that Asian Americans are integral to this country and the fact that we’re involved in building this country would be an idea that is more accepted and widespread,” Mah said.

Gong-Gershowitz said she’s ecstatic to see the outcome of the TEAACH act this fall as schools begin to implement it. She said she’s confident in the effect it will have.

“It’ll be about ensuring an inclusive and comprehensive teaching of our history that includes all those who contributed to it. The good and the bad so we can build empathy and understanding of one another,” she said. “We’re on the path to make this year the year of teach.” 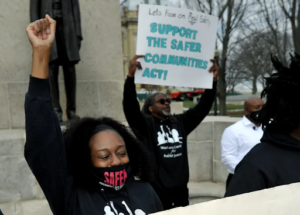 Joi Imobhio of Chicago, left, holds up her first as she attends a rally held by the Workers Center for Racial Justice on the state Capitol steps Wednesday. [Thomas J. Turney/The State Journal-Register].

Elsewhere Wednesday, members of the Worker’s Center for Racial Justice, a Chicago-based advocacy group, rallied at the Capitol to call on the General Assembly to pass a bill creating a program that would provide grants and wage subsidies to businesses that hire formerly incarcerated people.

The bill, introduced by Rep. Justin Slaughter, D-Chicago, has been in the works since at least 2020. Slaughter said he is working on securing funding for the programs through the state’s budgeting process.

Miranda Alexandria has advocated for reforms with the Worker’s Center for three years.

“You can’t talk about criminal justice without talking about Black people,” said Alexandria. “This is a system that is unfair to specifically our people.”

The Worker’s Center worked on several provisions in last year’s criminal justice reform omnibus bill, including a ban on police departments destroying records of police misconduct. In 2014, the group was also part of a successful campaign to ban employers from considering job applicants’ criminal records, according to Antonio Lightfoot, the group’s organizing director.

June 23, 2022
Posted by : staff
0
0
Source: Eric Lutz, Vanity Fair States like Illinois, which have been bracing for restrictions on...

June 1, 2022
Posted by : staff
0
0
Source: Claire Hyman, WBEZ Chicago Leaders in Chicago and Illinois respond to a series of...

March 29, 2022
Posted by : staff
0
0
Job Description: If you are a college student interested in working in public service and...