A rally was held Sunday in Glenview following a number of recent antisemitic incidents across the North Shore and Chicagoland. 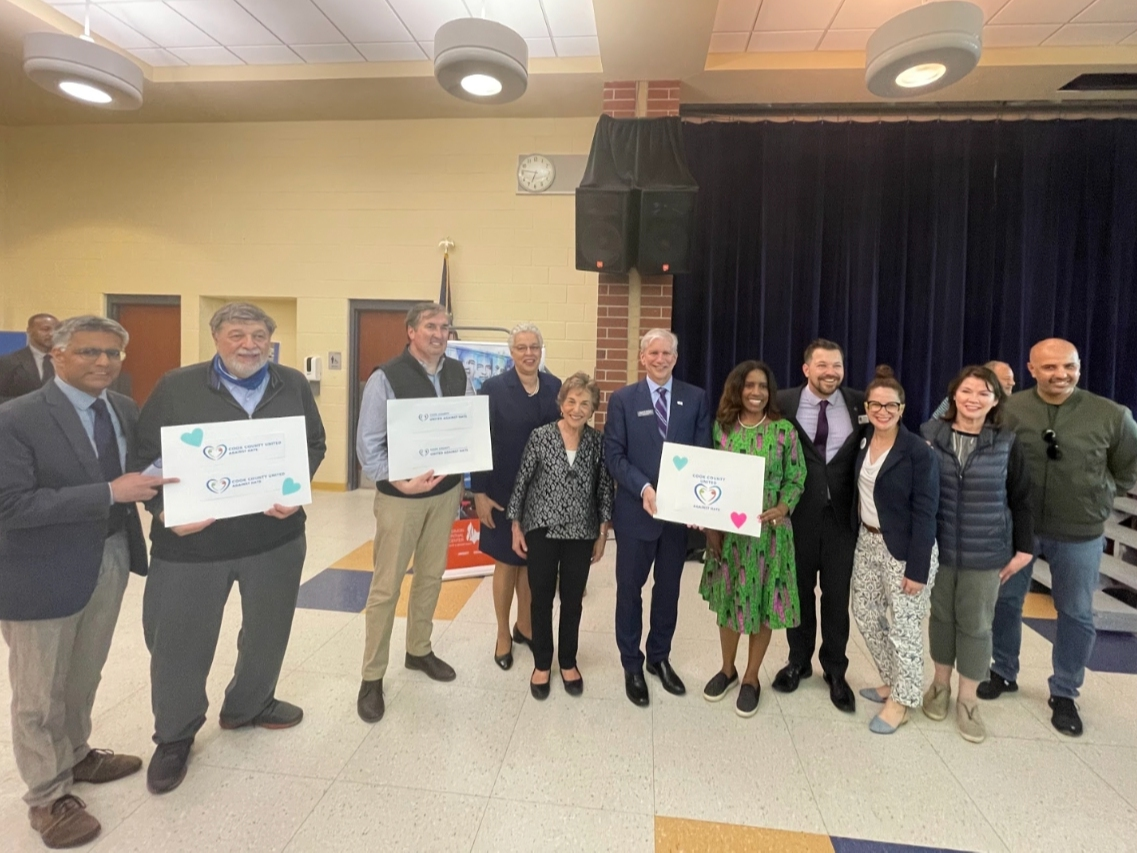 Participants in the United Against Antisemitism rally meet up. (Cook County Board of Commissioners)

GLENVIEW, IL — Cook County is reminding residents intolerance and injustice are not acceptable in the local communities. Following a rally Sunday in Glenview, Commissioner Scott Britton (D-14th District) was joined by Cook County Board President Toni Preckwinkle to launch a new campaign to show Cook County is a welcoming place for all: “Cook County United Against Hate.”

A new unifying symbol, pledge and website were unveiled at the rally.

The new logo for Cook County United Against Hate. (Cook County Board of Commissioners)

“One thing I, and all people of goodwill, can and must do is stand as an ally against hate and to reject hate for all time. When we recognize the symbol, we will know all are welcome and hate has no home there.” Britton said. “We learned the importance of allyship during the rightful protests for Black lives in the summer of 2020, and, similarly, I cannot truly comprehend the emotions of our Jewish neighbors over the thousands of years of hate and oppression they have been forced to endure. We must speak out against hate for anyone, for hate against one is hate against everyone.”

According to organizers, the Glenview rally was held to fight back against the surge of anti-Jewish incidents seen in the northern suburbs of Cook County. The rally was planned in partnership with the Simon Wiesenthal Center, Action Ridge, and the Niles Coalition.

“The acts we’re standing against today go against everything we believe in Cook County,” Preckwinkle said. “Our Jewish friends, neighbors and relatives are an integral part of the fabric of the County we all call home. In a show of solidarity with our Jewish residents and everyone fighting against hate in our communities, this new symbol clearly shows that Cook County is a welcoming place for all.”

Last month, Britton said he and many other local residents received packages of antisemitic letters in their driveways that blame the war in Ukraine on the “Jewish agenda,” among other things. Britton said the letters also mentioned the COVID-19 pandemic and genocides in general, along with a “Let’s Go Brandon” flyer listing names and images of members of the Biden administration.

This new “Cook County United Against Hate” symbol provides a visible reminder that Cook County is united against hate in all its forms, according to Cook County. It shows that the County is actively seeking to dismantle the systems that allow intolerance and injustice to exist. As part of this work, the County has invested $50 million in the Cook County Equity Fund as part of over $100 million in equity-aligned investments over the past two fiscal years.

“I am proud to represent one of the most diverse districts in our nation. And I am proud that in the face of hate and injustice, we always come together in solidarity,” Congresswoman Jan Schakowsky said. “With Yom HaShoah next week, we are reminded of the devastation caused by unchecked hate and ignorance. Never again. Antisemitism has no place in Cook County, or in this world, and we will always stand together in the name of peace, tolerance, and equality.”

By posting the “Cook County United Against Hate” icon, officials are hoping Cook County residents, visitors, and admirers near and far “can pledge to stand up against intolerance of any kind, to support those with different lived experiences, and to champion efforts toward social justice.” This symbol of unity can be posted, shared, and tagged on homes, cars, storefronts, and office doors.

A new website was created where residents can find the symbol for download, take the pledge to unite against hate, and view a growing library of resources to learn how to safely interrupt hate. The first series of resources support the County to unite against antisemitism. Future sections will support efforts to welcome all people regardless of their race, religion, ethnicity, age, gender identity, sexual orientation, disability, class, or other backgrounds. To take action, individuals, groups, and communities are invited to visit: www.CookCountyUnitedAgainstHate.com.

On April 7, Britton passed the Resolution Against the Rise in Anti-Semitic Hate and in Support of Cook County’s Jewish Population highlighting the disturbing rise of anti-Semitic hate targeting in the Jewish community, including broken glass, presence of swastikas, verbal attacks, and physical assaults, acts of vandalism, bomb threats, and distribution of incendiary propaganda.

The April rally was part of a Spring of Action to escalate awareness, educate neighbors, and encourage action against the disturbing trend of anti-Semitic propaganda, vandalism, and assaults targeting the Cook County Jewish community, according to organizers.

0
0
Source: Claire Hyman, WBEZ Chicago Leaders in Chicago and Illinois respond to a series of...

November 18, 2021
Posted by : staff
0
0
Today, landmark legislation to address the climate crisis is on its way to the Governor’s...