Home › news › “People Woke Up and Realized This is Real”: Blue States Are Readying for a Post-Roe World
news
June 1, 2022
Posted by : staff
Comments: 0
Likes: 0

States like Illinois, which have been bracing for restrictions on abortion, are preparing to become safe havens for reproductive rights. “I now feel a responsibility,” says one Illinois rep, “to women outside of my own borders.” 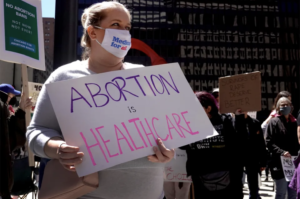 A pro-choice demonstrator marches in Chicago May 7 after a leaked draft decision indicated the Supreme Court had voted to overturn Roe v. Wade. SCOTT OLSON/GETTY IMAGES

Some of her colleagues in the Illinois state general assembly thought she was being “hyperbolic,” she says — maybe even “hysterical.” But the Chicago Democrat, a longtime reproductive rights advocate, saw the “fertile seeds” that the antichoice movement had spent years planting starting to blossom into a grave threat to abortion rights, and led an effort to build a “firewall” of laws to protect and expand access to the procedure — including the Reproductive Health Act she sponsored, which was signed by Democratic Governor J.B. Pritzker in 2019 to make abortion a “fundamental right.”

That legislative push helped turn Illinois into a national leader in reproductive healthcare. It is also likely to soon make it a refuge for people in states as far away as Texas, who will face even less access to abortion if the Supreme Court overturns Roe v. Wade, as it is expected to do. Indeed, Illinois already serves large numbers of out of state patients, who often face significant barriers to abortion even with Roe in place. But the state is bracing for a post-Roe surge: Cassidy and others in Illinois helped secure freedom of choice here in Illinois before reproductive rights came under existential threat nationally; now, healthcare advocates here are working to ensure they can meet patients’ needs after those threats come to pass.

“We’ve been working very intentionally for the last several years with this day in mind,” Cassidy tells Vanity Fair. “The stakes could not be higher.”

What are those stakes?

Kristen Schultz, chief operations and strategy officer with Planned Parenthood of Illinois, says that about four percent of patients at her organization’s clinics every month already came from out of state. That has doubled to eight percent more recently, she says, and has continued to increase; March and April, Schultz says, had the highest number of out of state patients ever. Should Roe fall, she tells Vanity Fair, Planned Parenthood of Illinois anticipates up to 20 times the number of out-of-state abortion patients it currently sees.

Abortion rights, long under threat, have been especially vulnerable in recent years as the Supreme Court swung to the right and GOP-led states took bolder steps to erode abortion access — despite Americans’ overwhelming support for reproductive rights. “At the end of the day, this comes down to power and control,” says Kelley Robinson, executive director of the Planned Parenthood Action Fund. “This is not the will of the people. This is the work of a minority of extremists.”

But while states like Texas and Oklahoma impose draconian restrictions that essentially outlaw the procedure — skirting Roe by empowering private citizens to take legal action against abortion seekers and providers — other states like Illinois, California, and New York have taken steps to safeguard and strengthen the longstanding rights, including for those who come from other states seeking care.

“We are an island,” says Democrat Jennifer Gong-Gershowitz, an Illinois state representative who as a freshman lawmaker helped get the Reproductive Health Act and other pro-choice legislation get to Pritzker’s desk. “I think our sense of responsibility feels larger, because as an Illinois legislator, I now feel a responsibility to women outside of my own borders.”

“The universe is no longer just my backyard,” Gong-Gershowitz adds.

The task right now is two-fold: To support those seeking reproductive healthcare in other states and to ensure providers have the resources to meet their needs.

The White House and pro-choice leaders are exploring ways to help those seeking abortions travel for the procedure — including, potentially, through Medicaid. Innovations in reproductive healthcare, including the expanded use of abortion pills that can be prescribed by telehealth providers, could also prove crucial. Local authorities have stepped in, too: A week after a draft of Alito’s majority opinion leaked to Politico, the Chicago Health Department pledged $500,000 to “support access to reproductive healthcare for Chicagoans and patients seeking safe, legal care from neighboring states that have have or ultimately will ban abortion.”

“Prior to the legalization of abortion, tens of thousands of women wound up in emergency rooms every year from botched, illegal abortions. Not all of them survived,” Chicago Public Health Commissioner Allison Arwady said in a statement announcing the initiative. “We must never go back to that time.”

In Connecticut, Democratic Governor Ned Lamont in May signed a law protecting people from out of state who seek or provide abortions there, allowing those facing legal action against them in another state for receiving or providing abortion care to sue for damages. “I am very appreciative to the majority of lawmakers in Connecticut who had the foresight to draft this legislation at a time when the right to a safe legal abortion in America is in jeopardy,” the governor said. Cassidy says she and her colleagues are looking not only at protecting providers, but trying to find ways to make it easier for abortion providers from states where the procedure is outlawed to “reestablish themselves” in Illinois.

Schultz says Planned Parenthood of Illinois has been preparing for this crisis for a while, too, and has been building up its “pivotal infrastructure” to help provide care for those in neighboring states, including by establishing clinics near the state’s borders with Wisconsin and Indiana — two places that could see abortion restrictions soon after a Supreme Court ruling on Dobbs v. Jackson. The organization is also looking to boost support for its healthcare providers and staff, who may soon face an influx of patients who will have overcome significant burdens by the time they access care. “Providers and staff are ready to provide the care patients need,” Schultz said. “At the same time, they know there is an increased demand coming, and we’re all preparing ourselves for what that might feel like in the future.”

Still, health advocates worry the state may not be ready to face the influx coming their way. “I think it’s safe to say we’re gonna have more work to do to meet that need,” says Gong-Gershowitz. “We are in the fight of our lifetime.”

If there’s any good news here, it’s that there may be more of a sense of urgency among Democrats: “I think a lot of people woke up and realized this is real,” Cassidy says. “This was not rhetoric. This was not saber-rattling…The opposition worked with an intentionality, a consistency of plan, a uniformity that we didn’t have.”

The trouble is, they’re not only scrambling to meet the needs of those from outside their states — they’re fighting to ensure their own protections they’ve passed stay in place. “We can’t sleep on this firewall by any means,” Cassidy says. Challenges to the RHA and other Illinois laws will likely crop up in the wake of a Roe decision, Cassidy says, and rights like marriage equality could come under threat next. And the safeguards Illinois has in place could be dismantled by a single election — if Democrats lose their majority in Springfield, for instance, or if Pritzker loses reelection in November to one of the Republicans who have spent primary season trying to pass a conservative purity test. “We did everything we could do, but now we’ve got to keep doing it,” says Cassidy.

“We are now facing a pivotal moment in history, where the future of our most fundamental rights is going to be determined at the state level,” adds Gong-Gershowitz. “You can never take your foot off the gas. You can never fall asleep at the wheel. Antichoice extremists who want to deny women the right to choose have been at this a very long time, and we’re seeing the impacts of that now. Unfortunately, I think we’re going to be in this fight a very long time.”

June 23, 2022
Posted by : staff
0
0
Source: Claire Hyman, WBEZ Chicago Leaders in Chicago and Illinois respond to a series of...