The majority of those attending the event were high school students, including students from Glenbrook South, New Trier, and a group of nine from Maine West High School in Des Plaines. Others attending identified themselves as members of Moms Demand Action chapters including the newly formed Glenview Northbrook, New Trier chapter, and the Evanston chapter.

At Wednesday’s gathering at the Glenview Public Library, an emergency room doctor who works at Evanston’s St. Francis Hospital and other locations discusses her experience with shooting victims, and the time a shooter fired at a hospital she was working at in Chicago’s Portage Park. The bullet missed her head by inches. U.S. Rep. Jan Schakowsky (right) looks on. (Tom Robb/Journal photo)

“What I heard in that room was power. Students and activists have had enough,” Schakowsky said in an email to the Journal after the event. “Bulletproof backpacks, active shooter drills, and planned escape routes. These are just some of the things our students are forced to deal with. Kids no longer feel safe in school. We can’t sit back. We need action, and we need it now. I am committed to making a change. Our future generations are depending on us.” 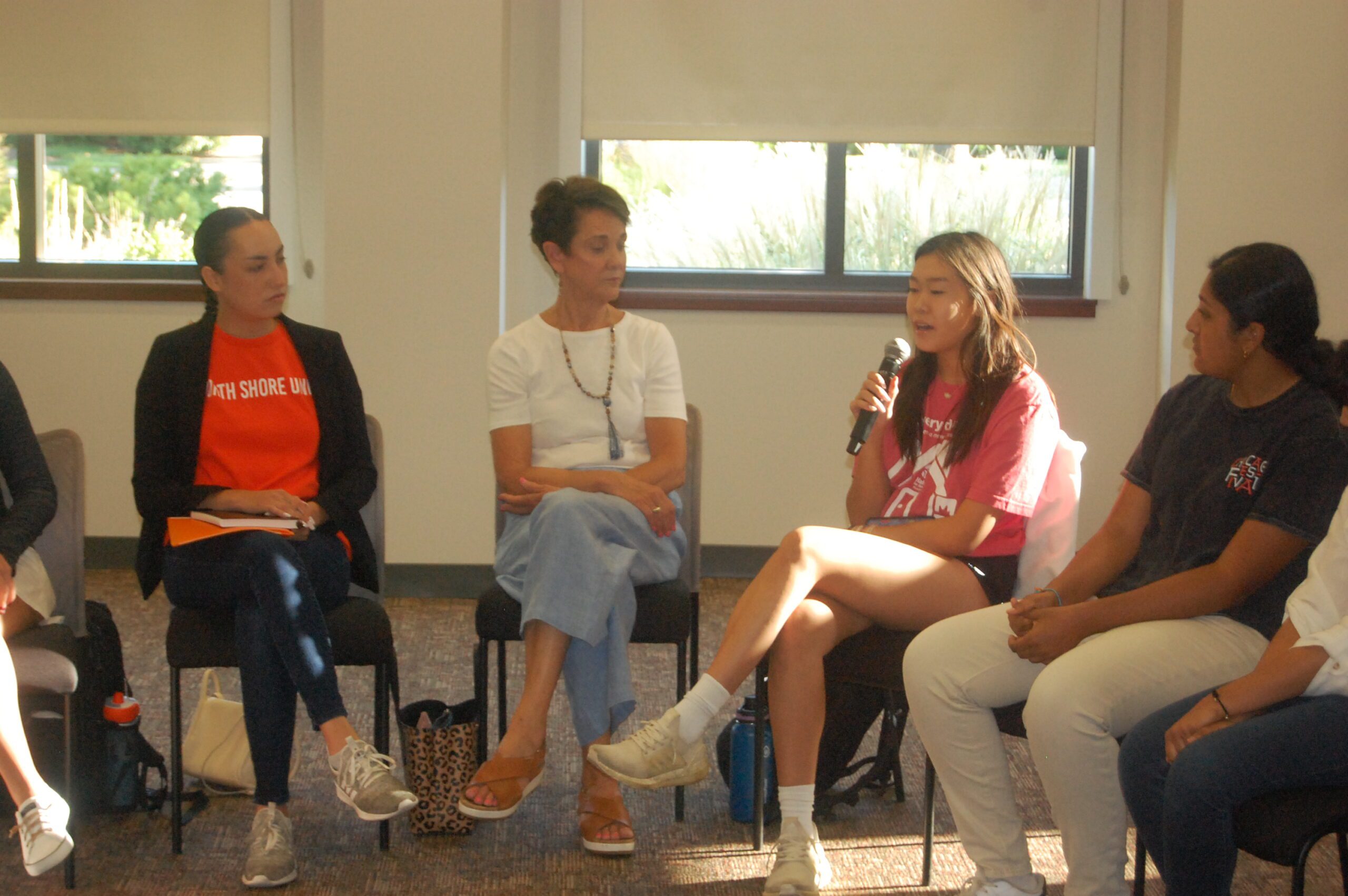 Lee recalled a social media scare, which turned out not to be true, last year at GBS. She said a threat of violence was made through social media causing many to leave school for the day.

“Kids were staying home, kids were leaving school early,” Lee told the Journal. “I didn’t have a car and my parents work, my stomach dropped (with fear).”

Lee recalled the next three days. “Everyone was on edge.” She recalled being chilled, walking in the GBS parking lot that day when so many left early or did not come at all. She said the parking lot, typically one of the busiest places on campus just before and after the school day, was nearly deserted.

“Students shouldn’t have to be here” dealing with this issue, Lee said. “Why do I have to address these deaths?”

Also at the event were nine Maine West students, many from Des Plaines and the same AP Civics class taught by social science teacher Dan Fouts.

After the event, Fouts told the Journal he got a note from his former student Andrew Goczkowski, who is both the mayor of Des Plaines and a senior aide to Schakowsky, informing him about the event just two days before it was set to take place. Fouts said he told his students about it as an opportunity to fulfill a civic action required for the class. Other types of civic actions include attending a city council or village board meeting. 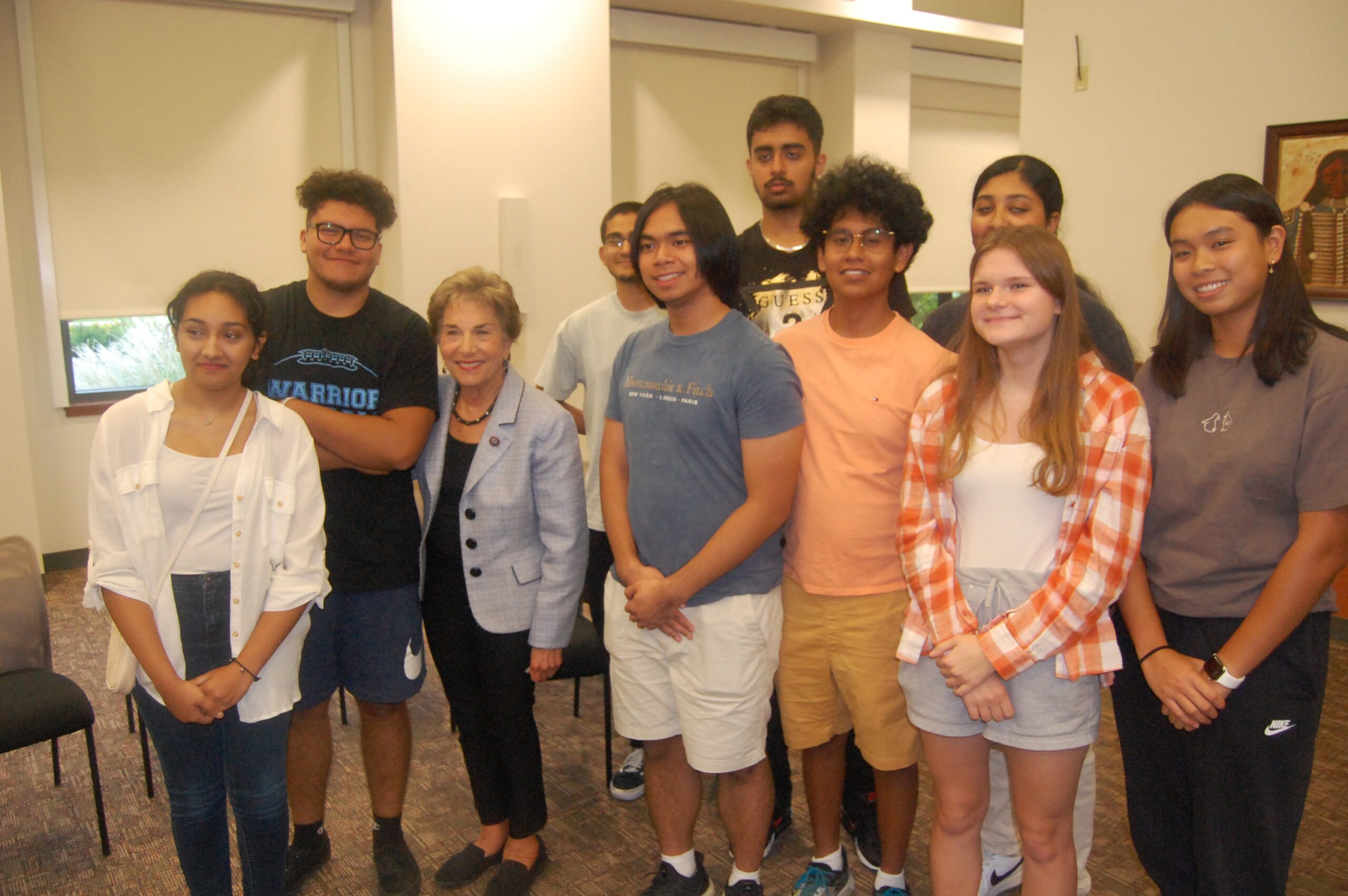 Maine West students spoke with the Journal as a group after the event. Several said they do not feel safe within their school halls.

“The doors to the school are secure most of the time,” but students said outsiders are still able to enter the building. Several recalled an incident on the first day of classes this year when they said a man ran through the school.

“We narrowly look at the impacts (of gun violence) to the victims and their families, but we don’t understand that the rest of the community lives with fear on a daily basis,” Gong-Gershowitz said. “Looking to solve this problem reminds us of the magnitude and urgency to do something now.”

Schakowsky said activism, like the kind practiced by many in that Glenview Public Library room Wednesday, is why the gun control legislation that has passed was able to.

The bill recently passed in the U.S. House and was headed to the Senate as Resolution 1808, called the “Assault Weapons Ban of 2022.”

Schakowsky spokesman Alex Moore defined specifically what HR 1808 would do if passed and signed into law in its current version. If passed, the bill “prohibits the sale, manufacture, transfer or possession of semi-automatic assault weapons, as well as high-capacity magazines,” Moore said. “The bill bans all semi-automatic rifles that can have a detachable magazine and have a military feature such as a pistol grip, and a detachable stock or grenade launcher, among other features. It also bans ‘all semi-automatic rifles that have a fixed magazine with the capacity to accept more than 10 rounds.’ The bill would not ban current semi-automatic weapons that people own, meaning current firearm owners would have their weapons grandfathered in.”

June 23, 2022
Posted by : staff
0
0
Source: Eric Lutz, Vanity Fair States like Illinois, which have been bracing for restrictions on...

June 1, 2022
Posted by : staff
0
0
Source: Claire Hyman, WBEZ Chicago Leaders in Chicago and Illinois respond to a series of...